Article on demographics  (at theparliamentmagazine.eu)

Demographic change is about people, their lives and livelihoods. The situation in the European Union is alarming. The rapidly declining population may prove to have major consequences, even more evident in the coming decades, which will absolutely affect the citizens’ overall well-being.

Persistently low birth rates and higher life expectancy are transforming the composition of the age pyramid, resulting in a gradual transition towards a much older population, as is already apparent in several Member States. Indeed, in 2018 the fertility rate stood at 1.55 children per woman, while 2.1 is the minimum required to keep the population size constant in the absence of migration. Almost no region in Europe has a rate at this level. Some regions register an even lower rate, of less than 1.25. This is the case for instance in the north-west of the Iberian Peninsula, South East Italy and Sardinia, and some parts of Greece.

In Greece, deaths have exceeded births for the ninth year in succession and the average age of the population is increasing, while the active population is decreasing continuously. Greece’s population will have fallen by 2.4 million in 2050, according to a Greek Parliament report recently published. Similarly, EUROSTAT data show it is projected to by more than 3 million to only 7.660 million in 2070. By 2050, the percentage of over-65s is expected to have risen to almost to one third of the country’s population (between 30.3% and 33.1%), while that of under 18 years of age is expected to have shrinked to 15.4%.

The risks associated with this demographic time bomb are monumental.

Furthermore, the impact of the ongoing pandemic and the economic crisis, poverty, unemployment, insecurity, uncertain job prospects and the brain drain of young people are aggravating an already critical situation.

The fact is that young workers bolster the economy, increase productivity, and support the health, insurance, and pension systems. However, the economic crisis has driven hundreds of thousands of qualified young people away from Greece, making the problem even more acute. As a result, the potential consequences on insurance funds are incalculable, as is the impact on the job market and on productivity and growth.

The demographic problem is thus a major challenge, since lower productivity will lead to lower growth which will have very negative consequences for the sustainability of the debt and more generally for public finances.

Apart from the severe economic dangers associated with demographic trends, there are several social aspects that should be seriously considered.

The economic uncertainty increases the stress related to be able to provide for one’s family. It especially affects young people in their decisions and plans for if and when to start their own family. This situation leads eventually to lower fertility rates which is a defining factor for even sharper shifts in demographics in the coming decades.

Undoubtedly, as sustainable development and inclusive economic growth require human capital and new, innovative solutions, demographic renewal needs to be urgently supported in all EU Member States as a matter of priority It should be anticipated and reflected in all future Commission initiatives in a horizontal manner, and be placed systematically  high on the agenda, given that it is  directly linked with Europe’s own future. 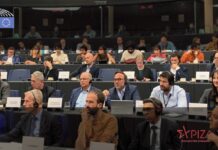 <
< 2022 >
Ιούνιος
>
Μήνας
Μήνας
Λίστα
Εβδομάδα
Ημέρα
Sorry, there are no polls available at the moment.