MEP, Elena Kountoura, participated as invited speaker at the  «Coalition of FBO Forum» regarding Femicide Observatories and Psychological Violence against women and especially mothers. She presented her report on  «The Impact of Intimate Partner Violence and Custody Rights on Women and Children», which was recently adopted as a resulution by the European Parliament.

I would like to thank you for the invitation to join you in this event, held on the Eve of the International Day for Eliminating ViolenceAgainst Women. Andalso, to commend you for your commitment in addressing all the adversities that women victims of violence endure, and your work towards bringing the change so much needed.

To this end, I will briefly touch upon critical issues that I have addressed through my initiative report as Rapporteur of the European Parliament on «The Impact of Intimate-Partner Violence and Custody Rights on Women and Children».

As you may know, the reportwas adopted with vast majority by the European Parliament in October’s Plenary and has been submitted as a resolution to the European Commission, to be taken into consideration in its upcoming directive for combatting gender-based violence in the EU.

With this progressive ground-breaking report, the European Parliament, for the first time focuses not only on women, but also on children that have been impacted, either as victims themselves, or as witnesses of such violence.

We call on the European Commission and all member-states to adopt a holistic European framework in support of the fundamental right of every woman and child to a life without violence.

Intimate partner violence is a serious, often long-term, hidden social problem that causes systematic physical and psychological trauma. The consequences are grave for the victims with a severe impact on the emotional, economic and social well-being of the children and the whole family.

As we all know, the statistics are extremely alarming.

One in three women has been the victim of physical or sexual abuse.

One in five has been abused by her partner or ex-partner.

But two out of three do not file a complaint, because of the fear, the shame, the blackmail, even the threatsfor their lives or their children’s lives that they receive from their abuser.

Other obstacles they face are due to the lack of trust in the authorities that they turn to for help, and also their economic dependency. Women victims will be forced to stay with the abuser, because they have nowhere else to live and zero income for themselves and their children.

Still, when they find the strength to get away, the violence might not stop, even after the separation.

During the pandemic and the lockdowns, domestic violence increased sharply, as women and children found themselves in confinement at home 24 hours a day with their abuser. In some member states, reported incidents increased even by 60 per cent.

While other reports show, that even when lockdown measures were lifted, the abusers reacted even more violently, because they lost the control they had gained. And this is reflected in the growing list of femicides and infanticides across Europe.

The pandemic has highlighted distortions and legislative gaps that preexisted in addressing the full spectrum of domestic violence, and especially in matters of custody.

With my report, we ask foremost that the Istanbul Convention be swiftly ratified and implemented by all member-states that have not yet done so, but also by the European Union, as the first binding internationally legal text for combating gender-based violence, for prevention andfor the punishment of perpetrators.

We also call on the Commission and the Member Statesto ensure adequate and universal access for victims to structures and support services, and to tackle financial violence against women, including access to housing, income, and faster payment of benefits, such as child support.

We stated the need for specific programs for the perpetrators, with the aim of changing the patterns of violent behavior, as well as for a permanent mechanism that must be established against gender-based violence in times of crises, such as the pandemic.

Child abuse is a key criterion in determining custody.

Yet, in cases of intimate partner violence, it is often ignored in several Member States.

The trauma experienced by the child is often underestimatedduring the judicial proceedings. So is the risk for the child and the mother to be repeatedly abused.

This is why in my report, the European Parliament stated clearly that the failure to

recognize and address incidents of intimate partner violence in determining child custody and visitation rights, is a violation of the right of women and children to a life without violence, and is incompatiblewith the best interest of the child.

The protection of women and children from violence and the best interests of the child must be paramount and should always take precedence over other criteria, when establishing the arrangements for custody and visitation rights.

And when the mother is a victim of violence, we consider that she should be granted full custody, and that custody and visitation rights of the abusive partner should be revoked, as this is the only way to protect her from furtherviolence and secondary victimization.

Both parents must indeed participate actively in the life and upbringing of their child, but not if it is against the best interests of the child.

In any case, the European Parliament opposed to mandatory shared custody, because each case must be ruled individuallybased on what is the best interest of the child, as defined in the International Convention on the Rights of the Child.

Even more in cases with a history, or even an indication of violence, shared custody decisions should be postponed until adequate investigations and adequate risk assessments have been carried out.

Shared custody in situations of intimate partner violence exposes women to a continuum of preventable violence, by forcing them to stay in geographical proximity to their abusers, and subjecting them to further exposure to physical and psychological violence, as well as emotional abuse, which can have a direct or indirect impact on their children.

Moreover, ill treatment of children by perpetrators is often being used to exercise power over and commit acts of violence against the mother-victim of violence.

A further concern is the so called “parental alienation syndrome” and similar concepts and terms.

The scientific community does not recognize such terms and criticizes them strongly. Still, they are often being used by the abusive fathers in the context of intimate partner violence, as a strategyagainst the mother-victim of violence, putting into question her parental skills, dismissing her word and disregarding the violence to which children are exposed.

This is why in my report the European Parliamentfirmly rejects the use of this pseudo-syndrome, and calls on the Member States not to recognize it in their judicial practice and law and to discourage or even to prohibit its use in court proceedings, during the investigations to determine the existence of violence.

For these reasons, we consider that custody and separation cases should be adjudicated exclusively from special courts and judges, with the support of specialists such as forensic doctors, psychologists, child-psychologists and pediatricians.

Training must become mandatoryfor all personnelin the judicial system, in Law Enforcement, in forensic medical servicesand healthcare professionals, in relation to all forms of violence and its mechanisms, in handling such cases.

It is unacceptable, that we mourn the loss of women and children, because the competent authorities failed to recognize the risk and react timely.

Finally, as we state in our report, I would like to point out the need to support activities in schools and other settings for raising awareness of crime and trauma issues, on where to seek help or report such crimes, and how to build resilience among children and those working with children.

In everystrategy regarding prevention against intimate partner violence, actions must be included that reduce exposure to violence during childhood, and eliminate all forms of sexism and gender stereotypes.

The culture of inspiring respect towards human rightsand for every human being, regardless of their gender, is the only way of creating healthy relationships and prospects for true progress in our societies. 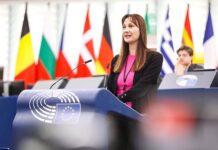 <
< 2022 >
Νοέμβριος
>
Μήνας
Μήνας
Λίστα
Εβδομάδα
Ημέρα
Sorry, there are no polls available at the moment.